By Lynnwood Andrews and Mary Sellman 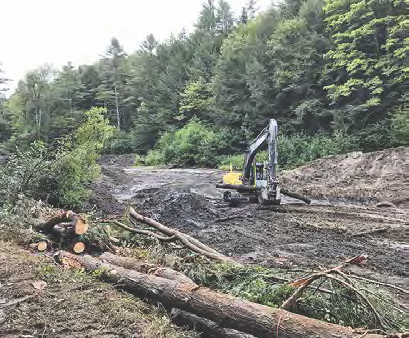 All of those 758 truckloads lumbering onto Beaver Meadow Road this past summer transported material collected behind the Norwich Reservoir Dam in order to restore the Charles Brown Brook to a more natural state. With the dam removed and the streambed rebuilt, 43 miles of stream now flow freely. Eastern brook trout, and other aquatic species such as minnows, frogs, mayflies, and stoneflies are expected to thrive with cooler water in the stream and obstructions gone.

The history of the dam began in the 1920s when the Norwich Water Supply Co. bought 800 acres along the Charles Brown Brook to create a public water system. The first dam was built in 1922, but was replaced in 1928 after it was heavily damaged in the Flood of 1927. The new, larger and stronger dam served Norwich well until the 1960s when water use began to exceed the reservoir’s capacity, and the Army Corps of Engineers found that it was in need of major repairs. The dam and 850 acres of watershed land were purchased by the Norwich Fire Department in 1970, but in 1973 the dam was further damaged by a flood, and it was no longer used to contain the reservoir In 1981 the Fire Department had found an alternate source of water, a large aquifer accessible from land off Route 5. Hurricane Irene damaged the dam further as well as the adjacent Norwich Pool, a beloved community swimming pond, rendering it unusable.

By 2016, Vermont officials had identified the stream as a priority river restoration project. In 2018, the Connecticut River Conservancy removed the dam with help from several organizations including the Vermont Department of Environmental Conservation, the New Hampshire Charitable Foundation, Vermont Fish and Wildlife, US Fish and Wildlife, Trout Unlimited, American Rivers, Patagonia, and the Norwich Conservation Commission. Restoration work will continue through the spring of 2019. Native plants will be installed streamside and a kiosk near the Bill Ballard Trail will have information about the dam.

The future physical adjustment of the stream will be studied by two graduate students in geomorphology from Dartmouth, Jordan Fields and Rebecca Rossi. The students are examining how long it will take the stream to return to a natural state by comparing it to sections of the stream above and below the dam site. Comparisons to upstream areas are more valuable than downstream because the dam removal will continue to affect the downstream section for some time to come.

Natural processes and flood events will alter physical characteristics of the stream such as its shape, width and the rock and sediment lining the streambed. The students hypothesize that flood events will make a stronger impact on the stream’s adjustment than natural processes. They use traditional survey mapping tools to measure the shape of the stream. A Terrestrial Laser Scanner maps water surface patterns to give them water flow data. Even the rocks and sediment on the streambed are monitored with tracking devices to record what kinds of rock and sediment move and where it goes. Not all of the material that collected behind the dam was taken away, and the students have already documented its movement downstream and the ensuing alterations to the stream. Because it is so bare and wide, the area where the reservoir used to be is especially prone to adjust significantly in response to different kinds of flood events – spring snowmelt, summer thunderstorms, or long, heavy soaking rains. All of this information will be important to understanding stream rehabilitation and management in the face of increasing extreme weather events.