The Call of the Coyote

You can let the boys yip and the noise will have that pleasant sound coyotes make on a very cold night when they are out in the snow and you are in your own cabin. 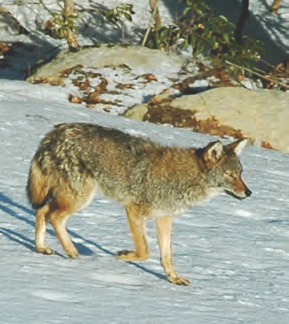 Coyotes calls were first heard in Vermont starting around 1948 after female coyotes interbred with wolves and domesticated dogs in Ontario and then spread to New England, taking over the ecological niche once occupied by the Grey Wolf, which was extirpated in the 1880s.

Here in Norwich, Tammy Heesakker reported, “I’m pretty sure I’ve seen one once in our field, and we can definitely hear them some summer nights when the windows are open.”

Ken Korey noted, “While walking on the roadways on summer nights we’ve come quite close to them, but were never threatened (nor were our companion dogs).” During 13 years at Pirouette Farm, Mary Piro reported, “We have lost no cats or dogs and they have never come too close to our horses or buildings. They are respectful and fun to watch catching the mice and other small animals that poke up after mowing our hay.”

While Norwich residents have had positive experiences with coyotes, others have hunted and trapped them.

Coyotes inspire the full range of reactions from admiration and amusement to fear and loathing. They have long been one of the most freely hunted, and even persecuted animals.

Although coyote research is lacking, especially in Vermont, and is often of lower quality, studies have shown that killing coyotes does not control their population, and actually may worsen livestock predation. Recent studies point to indiscriminate coyote killing as a key factor driving up coyote numbers, increasing their spread into new areas and causing them to prey on livestock. Instead, peaceful coexistence using a coordinated set of practices such as scaring away coyotes, using guard animals, sheltering livestock at night and so on have proven effective.

The current Windsor County board member is Tim Biebel, a home builder and author of a hunting blog. Board members are all hunters, and efforts to broaden diversity on the board have failed.

In his report to the Vermont legislature, Mr. Porter notes that the Vermont coyote population has reached its maximum because coyotes live in highly territorial groups that self-regulate population. He also states that habitat loss, forest fragmentation and winter severity are the significant factors threatening deer, not coyotes, though deer predation is often used to justify indiscriminate coyote hunting.

In May, a bill banning competitive coyote hunts in Vermont was passed. Still, coyotes of any age can be hunted every day of the year, at any time of day or night, and by means including shooting, trapping, calling, baiting and hounding. By contrast, deer and turkeys can only be hunted at certain times of year, in limited numbers and practices such as trapping, hounding and baiting are prohibited. They are specifically protected when bearing and raising young.

Coyotes compete with bobcat and fox for food, on the one hand, but they benefit waterfowl and song birds because they prey on domestic cats, opossums and raccoons. Their consumption of rodents also benefits farmers.

The ecological role of the Eastern Coyote is evolving. Eastern coyotes are extremely adaptable, exploiting a wide variety of foods from fruit and insects to small mammals, and from amphibians to deer. They can live in pairs or packs.

Next time you hear children yip, think of the pleasant sound of our new neighbor, coyote. For resources on coyotes, please visit Project Coyote or Wildlife Help.