What To Do About the Emerald Ash Borer

What will we lose if the ash trees of Vermont are driven to extinction by the emerald ash borer?

People often associate our forests with the iconic sugar maples and white pines. But Vermont’s three species of the ash (Fraxinus), which comprise about 5% of Vermont’s trees, also provide important wildlife, economic and cultural values. The green, white and black ash aren’t easy for a novice to tell apart. The ash borer, an invasive insect from Asia, attacks them all. 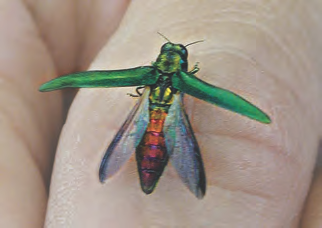 The ash borer is bright green beetle about a third of an inch long that kills trees during its larval stage by eating the inner bark. It is also attacking another US native, fringetree, (Chionanthus virginicus) which is not found in Vermont.

The ash borer showed up in Michigan in 2002 and was found in Vermont early this year for the first time in Orange County.The evidence so far suggests that the borer arrived here several years ago and has already spread to several counties, a common emergence pattern.

Ash trees, which are members of the olive family, don’t have nuts or fruits, but bear clusters of oar-shaped seeds like the familiar maple “helicopters” that hang dry into the fall. Bullfinches, nuthatches and woodcock, among others, eat the seeds. Owls, woodpeckers and wood ducks nest in ash cavities. The Canadian sphinx, Eastern Tiger Swallowtail, Orange Sulphur, Giant Sulphur, Hickory Hairstreak, Mourning Cloak and Viceroy butterflies, among others, rely on it as a larval host.

Sportsmen, especially lacrosse and baseball players, favor the ash. The Mohawk made lacrosse sticks from it, and Ted Williams swung an ash bat for the Red Sox. Basket makers prize the black ash, and long ago wove it into the Abenaki culture where it features in creation myths.

The disappearance of ash in the forest would diminish the quality of other timber trees. In the forest, ash trees provide a “trainer effect” on other species. They tend to grow faster and straighter than other hardwoods, forcing neighboring trees also to grow taller and straighter, increasing their value in turn. Where the borers wipe out the ash population, invasive bush honeysuckle takes hold. That shades out tree seedlings and harms canopy growth by sucking up nutrients and releasing chemicals into the soil that choke other roots, a competitive strategy known as alleopathy. 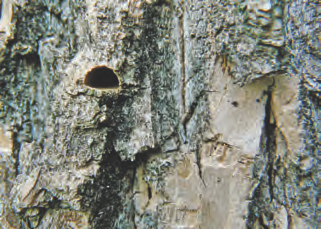 The distictive D-shaped hole left by an ash borer beetle.

To search for an infestation, look for dead branches in the crown, yellow, thin or wilted foliage, unusual amounts of woodpecker activity, shoots with very large leaves growing from roots or the tree trunk, and/or D-shaped exit holes in the bark. If you see any of these signs, contact Vermont Invasives at Vtinvasives.org.

Emerald Ash Borer spreads over short distances by flying. Long distance spread is mainly through firewood, ash wood products, infested ash plantings and trees, ash wood debris including chips and ash wood packing materials. Make sure you do not receive firewood or any other ash products or material from outside the state, or from infected Vermont counties (Orange, Washington and Caledonia).

At this time, there is no protocol for eradicating emerald ash borer. Pesticide use does more harm overall than good. The federal government has approved and released four species of Asian parasitic wasps known to infect emerald ash borer eggs and larvae. It will take several years to determine how successful these wasps are in North America, though early signs are positive. Some native wasps and birds appear to prey on the borers as well. Emerald ash borer kills most, but not all ash trees, so there is hope that the very small number of trees that survive have natural resistance, and can be used as part of an overall strategy of borer management along with native and introduced predators.

For more information, or if you see evidence of emerald ash borer go to Vermont Invasives website. If you can send in photos of the evidence they will be reviewed by state foresters and the state entomologist. Please also let the Norwich Conservation Commission know if you suspect or have found the borer in our local woods.